Like many equatorial countries, Thailand hosts a range of native bee species. From giant carpenter bees, to small stingless bees, and number of species that create honeycomb. The honey producing species include Apis cerana, Apis dorsata, and Apis florea. Nearly all commercial honey producers in Thailand are keeping Apis mellifera (European bees) because they are more docile than native bees and produce more honey; however, this species is not originally native to Thailand.

The native bees have a tendency to be more migrant (making them much more difficult to domesticate). Responding to changes in the environment and weather, bees will swarm to a new location when a current spot proves unfavorable.

While visiting Pai, a small town in Northern Thailand, I inquired at my guesthouse about the local bees. To my surprise, someone responded “we have bees!” and I was lead out to a pomegranate tree in the garden. Sure enough, gracefully hanging on one of the tree branches was a swarm of bees. I admired the beautiful cluster and watched the uncountable number of bees as they fluttered their wings creating a kind of communal vibration. Bees beat their wings like this while in a swarm in order to raise the temperature of the colony, so that wax can be produced. Secreted from glands in the bees abdomen, the temperature must be warm enough for wax to flow out of their glands. This wax is then layered together to make comb. Empty wax combs occupying trees may be the remains of migratory bees that were busy building before they relocated to a new location.

My research and photo comparisons have led me to believe that this was a swarm of Apis florea. The bees were small, a similar size to Apis mellifera, but not as long in shape. Their smaller, more rounded abdomens were a rusty red color at the top and had defined black and white stripes in the lower half. Bees in swarms are usually not bothered by unobtrusive visitors; busy at work, they buzzed in place as I captured photos. 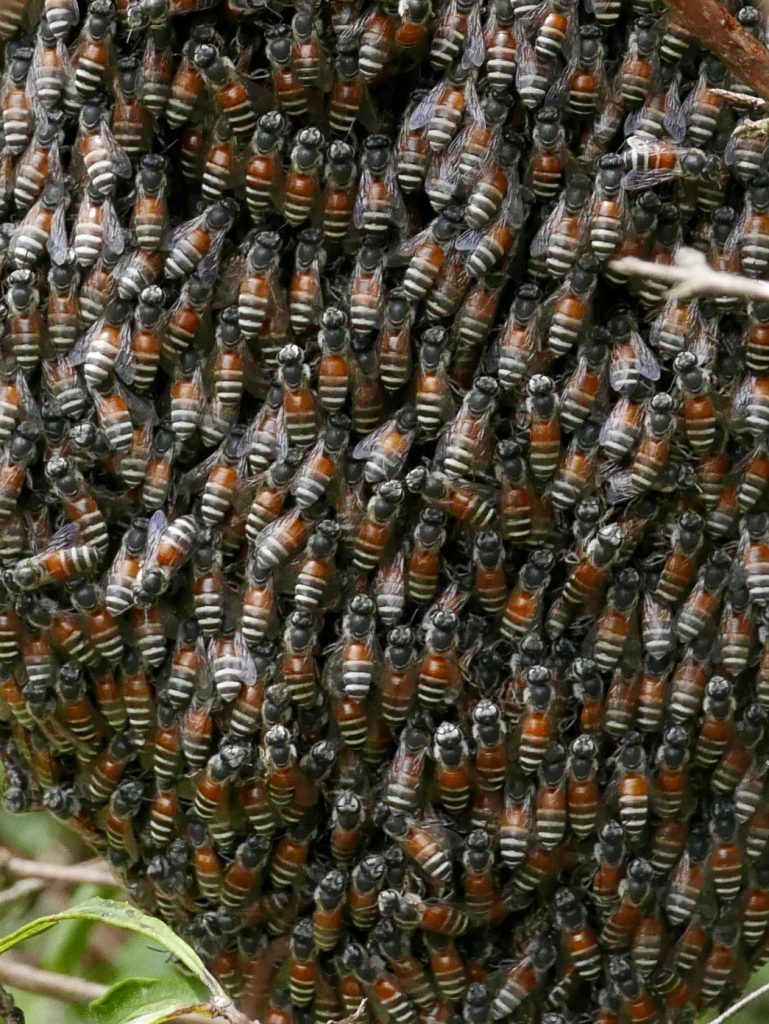 Captured on Comb: Watch How Bees are Born