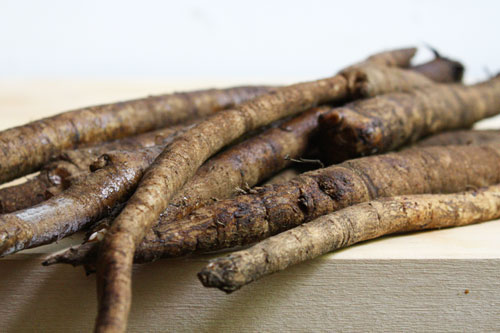 Burdock is a powerful medicinal herb, the root of the plant being used most commonly. It is revered for its blood purifying actions, but has a wide range of health benefits and it used to treat many ailments. It contains amino acids, calcium, chromium, copper, iron, magnesium, manganese, phosphorus, potassium, selenium, silicon, zinc, vitamins B1, B2, B3, and C in addition to a wide range of medicinal compounds.1,2

Modern research has labeled the herb as desmutagenic- meaning that it contains substances that inactivate mutagens (cancer causing agents). Mutagens include pesticides, natural plant chemicals, toxins created from cooking, and other pollutants than occur in our food, water, and air.1

In addition to its uses internally, burdock also promotes natural hair growth and a healthy scalp when applied externally in an oil or hair rinse. This is largely due to its phytosterol and essential fatty acid content. It can be used to treat dandruff as well as hair loss.1

Habitat/Bioregion: Burdock is native to Northern Asia and Europe, but grows in the United States and other temperate regions.

History/Folklore: Ancient Greeks used burdock root, greens, and seeds in their healing remedies. During the middle ages, Western herbalists consumed it as both a food and medicine. In Asia, where it is called “gobo”, it is traditionally eaten as a root vegetable, particularly in Japan.1