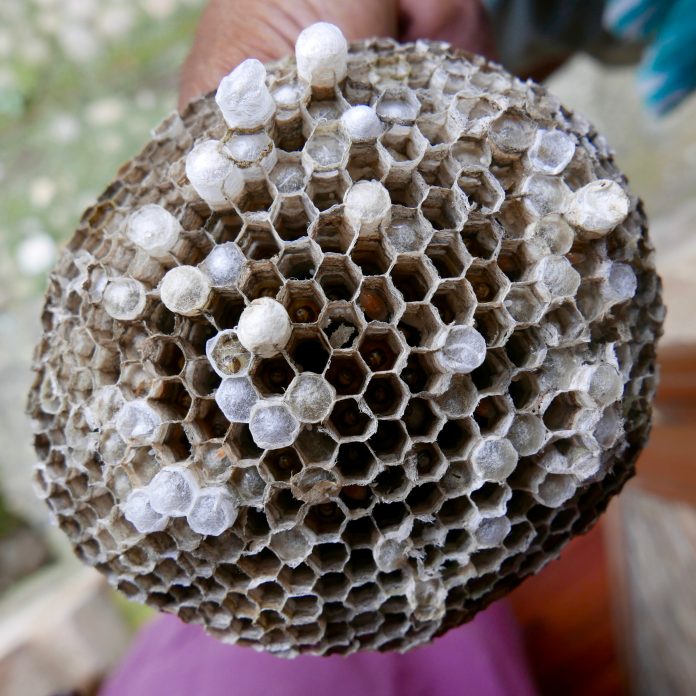 The Papa at my homestay appeared at my door this morning with a wasps nest. He had pointed it out to me days prior, attached to a branch in his garden. But now, it was in his hand…

He told me he would bring it to his grandchild. “It is very nutritious”, he proclaimed. “Eating the larvae?” I asked. “Yes,” he confirmed. (I was staying at his guest house in order to study bees nearby, so he knew I would be interested in his freshly-foraged find).

But hours later he appeared again with the wasp comb. “They were too scared to eat it”…he reported with disappointment. So he asked if I would join him in the feast. I had already eaten a number of bee larvae earlier in the week, while studying royal jelly production with Apis mellifera (queen bee larvae is a bi-product…), but wasp larvae?!

He tore apart the comb, revealing the fat yellow and white larvae squirming inside. They were much larger than the bee larvae I had indulged in. He even had a utensil- a pin for poking and popping them into the mouth. I ate my fair share, which was texturally unsettling but flavor-wise quite neutral. He devoured the baby wasps un-phased…it wasn’t his first time, he told me. Here’s how it went down: