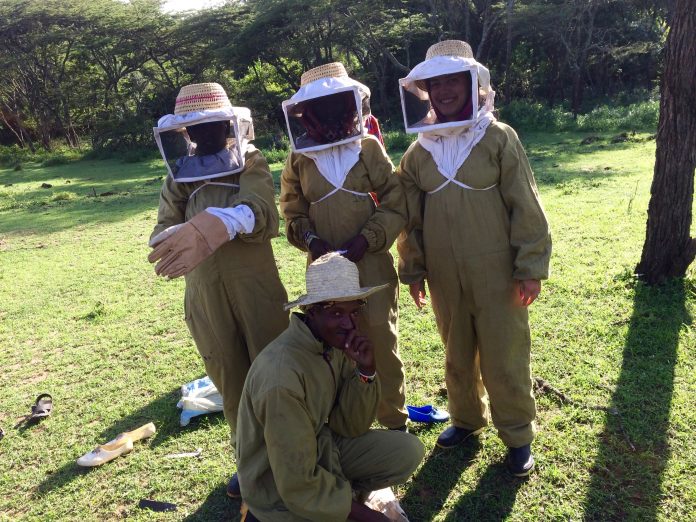 It was dusk, a time when the bees are less aggressive, and the sun was quickly on its way down. Our mission was to venture “into the bush” to recollect beehives that had previously been baited and hung. We were in Sero, a section of Ololosokwan Village, just below the Kenyan border. The beehives had now been colonized; it was time to move them into the bee cage where they would be more protected from natural predators and more easily monitored for honey production. I was with four Maasai, two men and two women, who were all more experienced in this task than me.

We wore rubber boots, long gloves, and double-layered bee suits for extra protection. Bee veils over woven hats were protecting our heads. We had just finished inspecting the hives in the bee cage, so, naturally, we were all covered in bees. A couple of the team members gathered together some leafed branches to use as a sort of “bee broom” and we took turns lightly brushing the buzzing insects off of each other. We then followed one another through the forest, navigating carefully to avoid the spiky plants (most of the plants there are equipped with large thorns). When we reached the first hive one of the men untied the wires from the supporting tree branch and placed the hive atop the head of one woman. Supporting the weight of the hive with her gloved hands, she deftly made her way back towards the bee cage. As usual when watching people in Africa carrying things on their heads- she made it look easy. I watched two others perform the same maneuver, until they signaled my turn. “Molly hii ni kwako, ni nyepesi” (Molly this ones yours, it is light). I balanced myself as best I could under the weight of the now colonized beehive. “Light” was not the adjective that came to mind as I positioned my arms to steady the large, top-heavy wooden box. Its weight pressed down on my skull while teetering in every direction, threatening to fall to the forest floor below. The hives had taken weeks to obtain colonies and a dropped hive would probably amount to a broken beehive and a lost colony, but in that moment, these logistics were the least of my worries.

African bees are notoriously aggressive. We were working with Apis mellifera, the same species of bees kept in Europe and the Americas for honey production; however, there are many different sub-species native to different continents, with each varying in temperament and behavior. Any of the Ololosokwan villagers that have had bee encounters can testify to the fierceness of the local species. Sometimes I saw young Maasai boys with severely swollen faces or limbs. The backstory? A trip into the forest to forage some honey…

I made my way carefully towards the bee cage with the colony on my head. The weight of the beehive was pushing my bee veil backwards, pressing the mesh over my face. This was okay except that the mesh was now crawling with bees. Any of them could easily sting my face or eyes if provoked…I did my best to remain calm, reminding myself that bees are intuitive creatures. Fear and haste can spark aggressive behavior, but a peaceful, relaxed attitude usually keeps the bees at ease. My mind was focused, but my arms were losing strength (holding a heavy object above one’s head is hard work!)

It wasn’t very far to the bee cage, but it felt like an expedition. My mind shifted into that kind of super present state you get every so often while traveling; the type that makes you a little bit nervous, but mostly fills you with joy…like, “wow, how did I end up in the bush of Tanzania, at night, with a heavy hive on my head, and bees crawling on my face”. I felt triumphant when I finally reached the bee cage and my colleague assisted me to deposit the beehive on the shelf, in line with the others. My adrenaline must have given strength to my tired arms because somehow I was able to go back for a second round. I transferred another hive and thankfully that’s all that was required; all of the hives had arrived successfully at the bee cage.

Work was finished, but we still had the task of “de-beeing” each other before we could take off our bee suits. We gathered some more branches and brushed away the bees as we walked, distancing ourselves from the bee cage. Moving across the grass in the dark we encountered the ascari (guard), who had arrived for his night shift as security for the bee cage. He was dressed as the iconic Maasai guardsman- a red plaid shuka (cloth) draped around his body, secured by a colorfully beaded belt, which was decorated with tiny metal coins on chains. In his left hand he held a flashlight and in his right hand he gripped a long, metal tipped spear. We exchanged the traditional Maasai greetings, “Supai”…”Eepai”, then he was handed the branches to assist in the bee brushing. The ascari swept the branches across my colleagues bee suit and as the bees flew off, he ran in the other direction, releasing a small shriek and dropping the bundle of branches. Perhaps he is better suited for a fight with a lion than a battle with the bees…