In East Africa there is no shortage of mysticism, rumor, and story surrounding herbal medicine. It brings both awe and fear- reports of magical healings and tales of terrible curses. In Tanzania, a country of over 150 tribes, medical traditions vary immensely across the country. I had been living in a Maasai region in northern Tanzania for about 4 months before meeting Sangau, the local Oloiboni (kimaasai; a natural healer or medicine man). During that time, I heard rumors of his powers- his ability to read minds, his capacity to lay curses, and his mysterious ways of reaching people through plants. {In Tanzania, the belief that traditional healers can cause harm, is equal if not greater than the belief in their healing power. Some say that by ingesting their medicine, the healers obtain the the power to control you. Other tales, like that of the “Babu of Loliondo”, tell the story of one small cup of medicine, curing previously in-treatable diseases} I heard all kinds of terms for Sangau, ranging from mchawi (kiswahili; witch) to mganga (kiswahili; practitioner), but regardless of the label most people could agree- Sangau has no shortage of clientele.

I came to know Sangau through an herbal medicine program led by Vermont herbalist Guido Masé, which applied western herbalism techniques to patient therapy in Wasso Hospital, combined with research and lessons on local, traditional medicine. We were introduced to Sangau, an integral figure in the local medicine scene, who gave us a glimpse into the treatments taking place outside of the hospital. With his contagious, joyful energy and boisterous laughter, 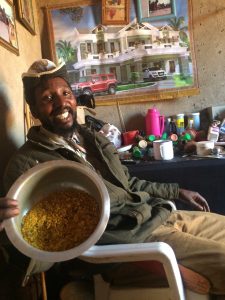 he led us on a plant walk, describing significant plants we came across and their respective medicinal uses. Using his sime (kiswahili; a double-sided sword worn on the hip of Maasai men) he would reveal the plants’ hidden structures, like the red inner bark of osanangururi (kimaasai), a tree typically used in the preparation of bitter, medicinal soup. We then visited his home, in the hills outside of Wasso, where he consults with patients, prepares his medicine, and also keeps bees. He sat us down for sweet, milky chai (a Maasai custom) and presented roots and barks of many kinds, sharing their elaborate Maasai names and applications in treatment.

Every plant has a unique name in the Maa language (the language of the Maasai people) and many people are familiar with their medicinal uses, but this number is reducing as times are changing and people are losing interest in natural medicine. With the introduction of hospitals and pharmaceuticals, plants are often seen as a lesser alternative. As one of the few people keeping Maasai botanical traditions alive, I wanted to visit Sangau again to dive deeper into the methods of his medicine. Since my first visit, the environment had changed dramatically; the rainy season of tall grass and leafy green shrubs was gone, leaving just the hearty trees to withstand the long dry season (without enough water to cultivate plants year round, his medicines are wild harvested from the forest or chopped from the staminous trees that live on his property). The climate was different, but patient populations remained large, with people traveling from near and far to seek treatment from Sangau.

I was most interested in asking him about his patient assessment techniques (would I get vague, spooky answers hinting at psychic abilities? Or more “tangible” responses?) We were sitting in small room filled with his patients. Energetically multitasking as he often does, he responded to my questions while intermittently attending to people; discussing symptoms in a mixture of kiswahili and kimaasai, squeezing powders out of squirt bottles, or jumping up to fetch more of his medicinal brew, which was steeping outside. Occasionally you could hear chopping sounds through the mud walls of the house- limbs 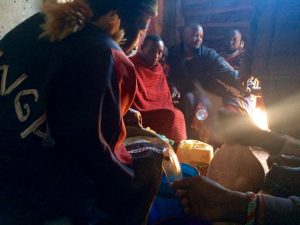 or roots of trees being prepared for addition to the cauldron. Amongst the organized chaos, I asked Sangau how he assesses his patients. He plainly told me that he talks to them about their symptoms and responds accordingly with medicine. Sometimes patients return 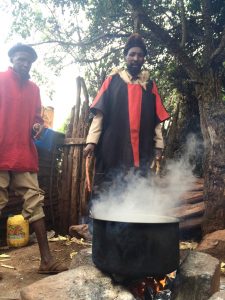 regularly for doses, but many travel from far away (likely on foot), in which case he may send them with a full course of medicine. He treats a wide variety of ailments, ranging from the local bacterias and parasites (brucella, typhoid, and malaria) to mental conditions. He believes in treating all people and his goal is always to get patients better- reaching that goal makes him happy. Still, he is not adverse to sending patients to the hospital, if their ailments are out of his reach. This is one element that distinguishes him from other “healers” of the region, who can sometimes let business impede the ultimate goal of healing. Sangau says that unlike the others, he does not charge his patients for treatment; if they get better, they can give him a donation if they wish. 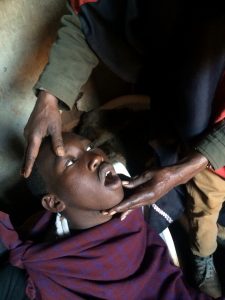 I asked him what was the most common ailment that he treats, to which he replied- fainting. He gestured to a young morrani (kimaasai; a young warrior) who was standing in the doorway. Ushering him in, the boy knelt on the floor while Sangau took some quick observations- examining his eyes and also his tongue. He then squirted a powdered mixture into one of the boys hands and placed a chuck of stingless bee “comb” in the other. The patient put both in his mouth, mixing the dry, bitter medicine with the sweet and sour honey (Sangau often uses regular honey or the sour variety made by stingless bees to make his medicines more palatable, though the honeys also have their own inherent health benefits).

I asked him how he came to be an Oloiboni, to which he responded that he comes from a lineage of Oloibonis, beginning with his grandfather, continuing with his father, and now him. Having been selected among his 14 siblings (his father had 2 wives, bearing 9 children with one and 5 with the other), he elaborated that his family looked for those children that expressed a resonance with the plants. Still, more than a natural healer, as an Oloiboni he is a respected leader in his family clan. Part practitioner and part political leader, he plays an important role in family meetings and his opinion is highly valued in decisions taken by the clan. His appointed position comes with customary costume as well- a leather cloak made of a variety of animal furs, a coordinating fur hat, as well as a long blue robe with a lion fur collar that reads “mganga wa jadi” (kiswahili; natural practitioner). These articles are passed through his family lineage of Oloibonis, repaired along the way as needed.

He strained into a metal pot a significant portion of his bitter concoction that had been simmering outside. He then opened a nearby bucket, revealing combs heavy with honey, harvested from his own traditional beehives. He dropped whole chunks of the comb into the pot to relieve the bitterness with some natural sweetness. After straining the mixture into a bucket to remove the wax, we all took turns blending the concoction with an orkipire (kimaasai; a traditional  blending utensil carved from the branch of a tree).

Throughout the visit he presented me with different roots and barks, some whole, some in various stages of preparation. There was osinandei (kimaasai), a root powder with a sweet, delicious flavor, used in to treat joint pain (he sprinkled some into my chai and it was lovely). He dispensed into my hand endipilikwa (kimaasai), another plant in powder form, this one used in the treatment of malaria. Showing me how he prepared such powders by hand, he shaved dried roots and barks with his knife. For stomach ailments there was orkisang’atung (kimaasai), a xanthozylum species covered in large, knobby spikes. Some plants he used singularly in treatment and with others he created specific mixtures. These tools of the trade were sprawled across the table of his consultation space, most in plastic bottles or bags, which he explained had more recently replaced the traditional Maasai calabashes (kiswahili; containers made from dried, hollow gourds).

It was all deeply fascinating and seemed scientifically sound, but where were the psychic powers and spiritual spells? I asked him directly how he felt about curses: are such phenomenons possible? Do natural healers use them to manipulate their patients? His response was wise and well put; “these are ideas of human beings!”. While he said that he does believe curses are possible, it is not a part of natural medicine. Rather, the competition that exists among human beings creates and propagates such rumors. He gestured to his crowd of patients (which was growing as new arrivals gathered inside and out); “why would these people come if I were hurting rather than helping them?” Much information is conveyed by word of mouth in these parts, which leaves room for fabrication and distortion. The rumors surrounding healers and natural medicine are no exception.

I asked him if there is anything he would like to convey to an outside audience, for example those reading from the United States. He contemplated the question, then formed his response:

His responses echoed sentiments of a changing world. A place where natural medicine used to be mainstream, but now more modern alternatives have taken the forefront. Always with health as the ultimate goal, it is clear that he holds a balanced respect for traditional medicine as well as the valuable aspects modern hospitals. While I was somehow let down by the logic of his methods, I was more pleased to see that behind his costume and charisma, he is a practitioner nonetheless. With a sincere concern for his patients and a deep knowledge of the plants, he is without-a-doubt an asset to his evolving tribal community and a vessel for valuable traditional knowledge passed down through the generations.