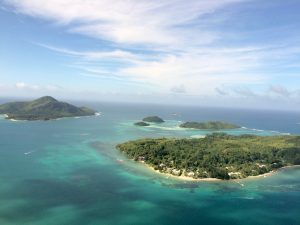 In the middle of the Indian Ocean, 1000 miles off the coast of Kenya, lies the exotic archipelago of the Seychelles. Its largest island- Mahé- feels like a mountain range surging up from the sea, outlined decoratively with beautiful beaches. Moving inward from the stunning sea level means moving upward; zig-zag roads climb the mountains as the beaches become a backdrop and the tropical forests thicken. 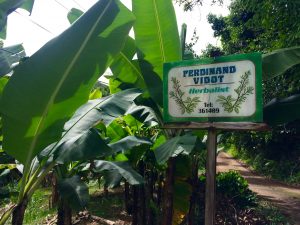 It is up in these green hills that 82 year old Ferdinand Vidot lives and works, his property marked by a small road sign, confirming his well earned title of “herbalist”. Passing beyond the sign the road becomes lined with nurseries and gardens, leading up to a quaint Creole home. I arrived with his son Hugh, who had kindly offered to assist with translation so that I could learn about his father’s practice. I was ushered in the direction of the house and a head poked out from over a gated entrance- Ferdinand. Without speaking he opened the bottom half of the gate so that I could enter his small consultation room. He gestured for me to sit on a little examination bed dressed with flower sheets.

Sitting in front of a wall of packaged remedies and religious relics, Ferdinand asked me how he could be of assistance. I explained my interests in medical herbalism and meeting healers around the world to learn about their cultural practices. He seemed eager to share information and mentioned other journalists and researchers who have visited his home. I added that I have been studying the traditional medicine of the Maasai people in Tanzania and he responded that his medicine is different because it is used for good. {There is a historical belief in this part of the world that those practicing with plants have the ability to “curse” others or cause magical harm. Local terms closely translate to “witch craft”. These beliefs are changing as plants are proving to have scientific healing benefits, but still there are many stereotypes and superstitions surrounding healers of the African world.} 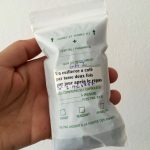 Ferdinand began pulling bags off of shelves- treatments for diabetes, menopause and fibroids, some for high blood pressure, a mixture for sleep. His preparations were usually a combination of 4 or 5 plants. He had woody mixtures for making decoctions (simmering plant matter in water for at least 15 minutes) and leafy blends for teas. Interestingly, his prescriptions were usually complementary in nature- for example a daytime blend from the wood of a tree, and a nighttime blend made from its leaves. He also talked about the importance of complementary planting- organizing gardens so that plants work together, rather than compete under the soil (prior to his career as an herbalist, Vidot was a farmer).

I asked about his assessment techniques, to which he replied that people of different cultures prefer to be assessed in different ways. For example, Russians and Germans like physical examinations; however, Muslim people do not. In those cases he will have a discussion of symptoms with the patient, which seems to be his main form of analysis. In his words, “when there is illness, there are symptoms”. During conversations with patients, hearing about their symptoms brings him inspiration for treatment. I asked him how he learned about plant medicine and he said that “it just came to him”. After using a boiled concoction from trees to treat his own sickness, he was drawn towards a medicinal use of plants. He also showed me books, mainly French, from which he has learned, but he was clear that he started studying such books “after he knew that he was going to be an herbalist.” We ventured into his plant processing spaces, which make evident his horticultural skills. Racks, shelves, bowls and boxes line the walls, laden with plant parts at various stages of (de)hydration. Vidot grows 95% of his medicine on his property; there are only 4 or 5 plants that he has people bring to him. We talked about his local reputation as an herbalist; Vidot is proud to have positive relationships with many doctors in the Seychelles. If their patients are not responding well to hospital treatments, often they will refer cases to Ferdinand. 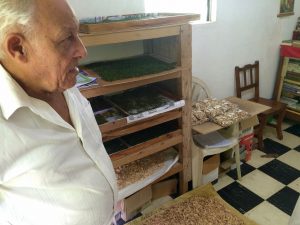 But it wasn’t always that “herbalist” existed as a respectable title in the Seychelles. Up until 1990’s, the only available term for the profession was “Bonnonm di bwa” (in Creole, someone using herbs for witchcraftery). Similar titles were (and still are) used throughout African countries for those practicing with plants, but over the years many nations have passed legislation to certify or register herbalists, which has created greater acceptance of the profession by the general public.

Ferdinand’s career has traversed the progression of herbalism across many stages, himself acting as a major proponent for important changes. In 1992 he was invited to an international conference on”Conservation and use of medicinal plants of the Small Island Developing States of the Indian Ocean and Madagascar”. When was asked what his title would be,  “witch doctor” seemed out-dated and unfitting for his work, so he told them that he would attend as an “herbalist”. The term stuck and it was this same year that the Seychelles passed legislation, liberating herbalists and allowing them to practice. Today there is a formal alliance of Seychelles herbalists, but still Vidot claims that he is the only one on the island practicing medical herbalism.

The conference, which included doctors, health ministers, and the newly coined “herbalists” united people from 5 regional islands- Madagascar, Reunion, Comoros, Seychelles, and Mauritius. From Ferdinand’s stories it seems as though these island nations are close allies in the documentation and conservation of botanical biodiversity. According to Ferdinand, about 1400 different species have been documented in Madagascar, 2000 in Mauritius, over 1000 in Reunion, and around 400 in Seychelles. These unique island habitats are home to rare, endemic species- plants that grow in one place and nowhere else in the world. Their moist tropical climates, allow for ecosystems with expansive varieties of remarkable plants. Vidot adds that the biodiversity of the islands has suffered losses due to the destructive processes of construction and development. 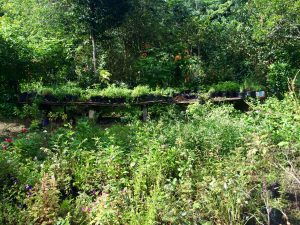 Venturing outside to the nature surrounding his house, it is clear that Vidot is playing his part in the conservation of the local flora. His gardens have many sections; culinary and aromatic herbs, surrounded by shrubs leading to medicinal fruit trees and flowers, with tropical vines running throughout. I enjoyed visiting with familiar plants like mint, basil, lemonbalm and oregano, while also discovering species more specific to the Seychelles, such as the “fer paryanke” a lovely white flower named after a sleek white bird. He showed me various native fruit trees, most beginning with “bwa”, which means wood in Creole; “Bwa Tòti” (Tortoise Wood), “Bwa Dous” (Sweet Wood) and “Bwa Koulèv” (Snakewood). Synonymously, Vidot’s mixtures usually utilize the wood of the trees (as opposed to just the bark or the roots).

Ferdinand’s herbal practice struck me as a mixture of the mythical and the medical…science, but not without spirit. His passion for his work is clear, and his knowledge of plants undoubtable. With his activities spanning botany, science, medicine, and health, his work seems as much about conservation as it is about healing. A true ally in the linking of plants with people, Vidot literally works from the ground up, cultivating respect for the profession of herbalism and propagating plant medicine for the people of his community. 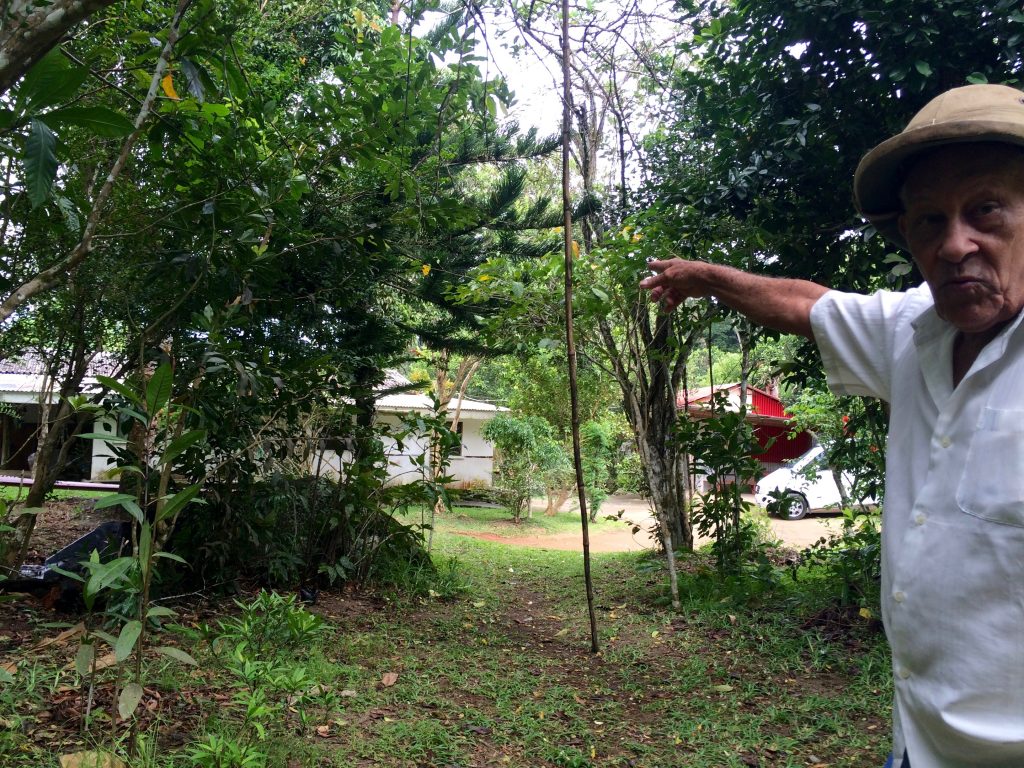